Need wire rope? Get a quote!

Wire rope comes in many different sizes, constructions and can be used in many different applications. Industrial Wire Rope is committed to finding the best wire rope for your application. We will use our 75 years of business experience to give you the right product the very first time.

Industrial Wire Rope can offer a complete line of ropes made in the USA, as well as wire rope made outside of the USA. We handle 6×19 & 6×36 Class Ropes, 8×19 & 8×25 Resistwist ropes, 19×7 ropes, Flex-X, XLT4, 7 Flex & 7 flex PFV and this is just our most popular ropes. There are very few times we get stumped when asked about the best wire rope for your application, but if we do Industrial Wire Rope can get the right answer with just a phone call.

Wire Rope is a machine and should be cared for in the same way. That is why we offer inspections services, testing services, training services to help our most important asset, YOU THE CUSTOMER! We have information on the basics of wire rope, glossary of wire rope terms and a catalog that provides the most complete and update information concerning wire rope.

Is it Tensile Strength? Or Working Load Limit?

Video:  How They Are Made – Hook Eye Wire Rope Slings 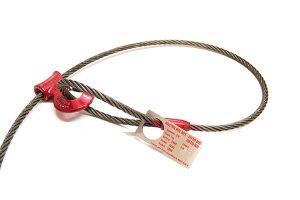 What is the Strength of Wire Rope?

What is Fatigue Resistance?

Fatigue resistance involves fatigue of the wire used to make up a rope. To have high fatigue resistance, wires must be capable of bending repeatedly under stress – for example, as a loaded rope passes over a sheave during operation. Increased fatigues resistance is achieved in a rope design by using a large number of wires. It involves both the wire properties and rope construction. In general, a rope made of many wires will have greater fatigue resistance than a same – size rope made of fewer, larger wires because smaller wires have a greater ability to bend as a rope passes over a sheave or around drums. To overcome the effects of fatigue, ropes must never bend over sheaves or drums with a diameter so small as to bend wires excessively. Standard for specific applications contain requirements for minimum sheave and drum sizes. Every rope is subject to metal fatigue from bending stress while in operation, and therefore the rope’s strength gradually diminishes as the rope is used.

How does Rotation Resistance work?

When a load is placed on a rope, torque is created within the rope as wires and strands try to straighten out. This is normal and the rope is designed to operate with this load-induced torque. However, this torque can cause both single part and multiple part hoisting systems to rotate. Load induced torque can be reduced by specially designed ropes. In standard 6 and 8- strand ropes, the torques produced by the outer strands and the IWRC are in the same direction and add together. In rotation-resistant ropes, the lay of the outer strands is in the opposite direction to the lay of the inner strands, thus the torques produced are in opposite directions and the torques subtract from each other.