Building Cities on a Rope

Previous Next
Building Cities on a Rope

It’s funny where an article in an industry journal can lead. Browsing through the February 2018 issue of Wire Rope News, the article Elevators and Their Cables Forever Change Urban Architecture, caught my attention.

And even more precisely, it was the caption under the Thyssen Krupp Elevator Test Tower that really snared me. The mention of elevator speeds of up to 18 meters a second (roughly 40 miles per hour) is very hard to ignore. Questions whirl. Like, “how soon do my ears pop?” And, “does this blast against gravity make me shorter?” And, “what kind of rope are they using”?

But, imagination doesn’t stop at the physics of the day. One of the unique features of industrial wire rope is that it connects objects not only in present-day operations, but in also in time. Wire rope belongs to a family of human innovations as diverse as thread for sewing and yarn for knitting on the domestic front to industrial applications for rope that likely began from grass, water reeds or animal hair.

We don’t have to go that far back though to look at how rope, and industrial wire rope, in particular, changed literally, the landscape of human civilization.

The Wire Rope News article homes in on changes in elevator technology in 1857. Credited with installing the first passenger elevator in the U.S. to move people between the different floors of a structure, Elisha Otis was still employing hemp ropes to do the lifting.

The 1857 development that made elevators worthy of moving people was actually a safety device that provided a brake in the event of a falling elevator. But a contemporary of Mr. Otis, John Roebling, was also exploring applications for a development of his own, wire rope cables. Less than 20 years later, use of wire rope was widespread in raising and lowering elevators.

In the 21st century, it may be easy to take the elevator for granted. Too easy, it would seem to Daniel Levinson Wilk. As related in the Boston Globe article, How the elevator transformed America, Wilk, who is a board member of the Elevator Museum in New York seems to believe the impact of elevators on American life is under-appreciated.

Elevators enabled cities to grow upward. They also “changed the hierarchy of buildings on the inside”. Before elevators made the trip to the top so undemanding physically, offices of lawyers and business people moved to higher floors. Penthouses grew in desirability as well, elbowing brownstones to some degree. Rooftop garden parties took on popularity. Perhaps the only discomfort caused by the elevator, which we still experience over 150 years later is the forced intimacy with strangers. Where DO we stand?! Where DO we look?

AS elevator history tells us, the original hoisting rope was made of hemp. A look to the future of elevators is out of this world – literally – the “proposed space elevator”, as described by SmithsonianMag. For at least 150 years however, wire rope has provided “the longest serving suspension needs” for elevators. Although we may take elevators and the equipment that hoists them for granted now, Elevator World, describes how the invention of wire rope “paralleled” that of the elevator, and the scrutiny given to their safety. 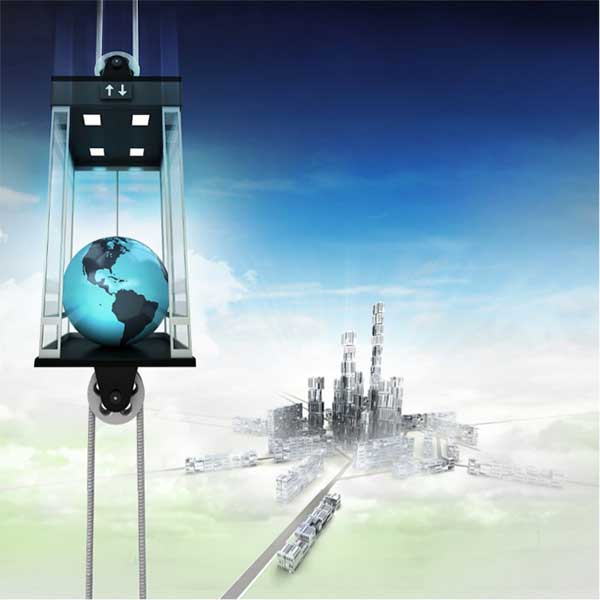 As we look around our facility at Industrial Wire Rope, we see coils upon coils of different types of rope. It looks so humble and unassuming. Yet, when put to the job, wire rope does such incredible things. According to Mowrey Elevator, elevators carry the equivalent of the Earth’s population every three days. That’s 7.4 BILLION elevator trips every three days!

We can’t even begin to imagine how many miles all that wire rope is traveling over the course of a year! Further than the space elevator rises, we bet!